Illinois-based PowerCookie Boards, LLC, was formed August 6, 2014 to make electronic sequencing projects easier for people without the need for extensive training and experience in the industry. 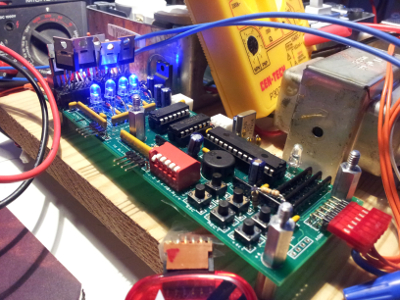 It began in 2013, with the aim to drive high powered lighting and motors using a unified sequence controller that could communicate with other boards. The target audience was specialists building trade show booths, industrial strength lights, and the like. The first iteration was the impressive giant pictured, and it came with 6 buttons, 2 triggers, and 4 light/motor channels. 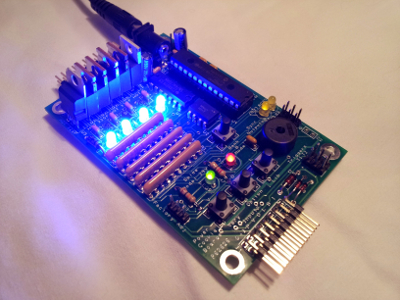 Eventually a prototype codenamed “Spice” was created, pictured next. Boasting a fully fledged library and allowing custom sequence creation, editing, copying board-to-board (and to computer), this device had 4 buttons, 2 triggers, 4 light/motor channels, and a speaker that emitted melodic cues to navigate a menu for an extremely customizeable product. 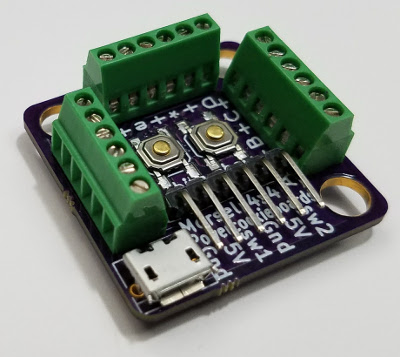 Through 2015 and 2016 the target industry shifted to model enthusiasts, including railroads, interlocking bricks, doll houses, dioramas, etc. Now size, simplicity, and safety became paramount! (“Safety” as in both safe for people to touch all parts of the device, and safe for the electronics in case wiring got funky.) The new prototype also enjoyed greater ability for driving light channels. For example, the “Spice” allowed for up to 2 simultaneous sequences to run on 4 channels, whereas the upcoming prototype allowed at least 8 simultaneous sequences on 8 outputs. The result from this development cycle was the creation of the Morsel4x4 (pictured), which was tweaked slightly before becoming the current Morsel product! For comparison, it had 2 buttons, 2 triggers, and 9 light channels. (The Morsel for sale has 2 buttons, 1 gradient input, and 9 light channels.)

Chris Tennant, owner of PowerCookie Boards, is an Electrical Engineer from University of Illinois, 1978.  Experience includes work in University research and hardware/software design at industry leaders including Motorola, Bally, Mitsubishi, NEC and Renesas, on projects spanning signal processing, telecom, automotive, industrial and others.  An important part of Tennant’s career has been Application Engineering, which involves technically training people of widely different backgrounds and skill levels so they can quickly become effective with new technology.

Jay Tennant is a graduate from MCC, Illinois, and has been in software development since 2005, having worked on open source projects and been a technical writer for different developer sites. Jay is also a piano instructor since 2005, working with all ages and backgrounds. He is a storyteller in music, and brings the art of storytelling to lighting.